Noise Sensitivity in Children with Autism Spectrum Disorder: How Can You Help Your Child?

Sensory processing difficulties can have an immense impact on the physical, social, emotional, and overall psychological well-being of a child, as outlined by this visual: 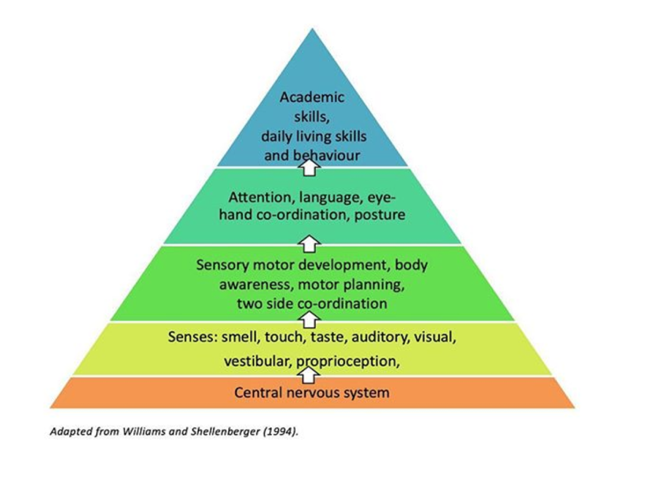 Many, if not most, individuals on the spectrum are hyper-sensitive to specific noises. There are several different types of noise sensitivity, and there are different treatments for each type. Consult with an audiologist or occupational therapist to pinpoint which type of sensitivity is impacting on the well-being of your child. Listed below are the 5 most common types of sensitivities. It is important to note that one person can often be affected by more than one of these concerns.

- Hyperacusis is an intolerance of everyday environmental sounds and is often associated with tinnitus, a ringing in the ears.

- Hypersensitive hearing of specific frequencies is often (but not always) associated with autism. A person is able to tolerate most sounds at normal levels, but certain frequencies are intolerable, especially above 70 decibels. For example, a person may have no difficulty being near a noisy dishwasher, but the higher frequency and higher decibel level of the vacuum cleaner will be painful.

- Recruitment is directly related to sensorineural hearing loss. It is defined as an atypical growth in the perception of loudness. Hair cells in the inner ear typically “translate” sound waves into nerve signals. Damaged or dead hair cells cannot perceive sound, but at a certain decibel level, surrounding healthy hair cells are “recruited” to transmit, and the person experiences a sudden sharp increase in sound perception that can be shocking and painful.

- Phonophobia (also called ligyrophobia or sonophobia) is a persistent and unusual fear of sound, either a specific sound such as an alarm or general environmental sounds. People with phonophobia fear the possibility of being exposed to sounds, especially loud sounds, in present and future situations, and sometimes become homebound due to this anxiety.

- Misophonia is an emotional reaction, most often anger or rage, to specific sounds. The trigger is usually a relatively soft sound related to eating or breathing, and may be connected to only one or a few people who are emotionally close to the affected person. For example, a client of mine becomes angry and runs out of the dining room because his father makes sounds while chewing food, but does not become angry when his mother and sister make similar sounds.

How Can I Help A Child Who Struggles With Noise Sensitivities?

One of the first steps that is useful to take, especially at a school or at home, is identifying “safe” places and increase your child’s participation there. This can then be the place that the child is able to go to when things are becoming too overwhelming for him/her. Furthermore, sensory difficulties are closely associated with anxiety. At its heart, anxiety is a fear of being unable to control reactions and situations. When a child has a phobia of bells, giving them several different types of bells to handle and experiment with at home, or ringing bells at customer service desks or in other public places, gradually allows the child to became comfortable with the sounds. Please note that the cure for a snake fear does not involve throwing a person into a snake pit. Similarly, relief from noise sensitivity requires a gradual desensitization and not a sudden exposure. Start by observing something from afar and take a step closer with each opportunity.

For example, if your child has a problem with sirens, starting with pictures of fire trucks and emergency vehicles in a book is a good, less-intrusive way to begin exposure. You may imitate the sound of a siren with your voice. You may read books about firefighters and police officers, or even allow your child to year a firefighter or police costumes. You may watch YouTube videos of fire trucks in action, or point out fire trucks and ambulances while driving. Eventually, those emergency vehicles became a part of everyday life and the sirens do not bother the child as much.

Headphones and earplugs offer instant comfort and relief. Noise-canceling headphones are the most effective, because they replace irritating environmental noise by producing calming white noise. Often, the best noise-cancelling headphones can be bought from your nearest hardware store. If you are in Australia, this would be Bunnings. Hardware stores provide great noise cancelling headphones for tradespeople, and are made to help alleviate the noise of a jackhammer or noisy drill, making them a perfect (AND CHEAPER) alternative to store-bought options. Earplugs are another option, however based on client feedback, I have received mixed reviews. Some children do not appreciate the texture of an earplug in their ear, and others report that they tend to fall out. However, they are usually made of either foam or wax, and it is worth trying both types to determine which is more comfortable. With that being said, audiologists, physicians, therapists and educators sometimes recommend against frequent use of headphones and earplugs, because a person can quickly become dependent on them. In the long run, blocking out noise can reduce coping skills and increase social withdrawal. I personally still recommend headphones for extremely loud places such as shopping centers.

When headphones are not readily available, or do not seem to be working as well as they usually do, offering another distraction to the child could be beneficial. By giving a person something like an iPad to focus on or an unusual privilege such as bringing along a favorite toy from home, it becomes possible to direct attention away from the offending noise.

Tolerance for noise often increases when parents/caregivers schedule frequent quiet breaks. After a morning out doing errands, you may enjoy a quiet lunch at home. After a playgroup with 7 other children, you made time to snuggle on the sofa. This might also mean 10 minutes of alone/quiet time after a lunch break at school. It is important to always take a break before the noise upsets your child, so that they will want to return for more fun after resting.

Noise sensitivity in children on the autism can be challenging to manage. It is best to connect with an occupational therapist and a psychologist to ensure the most appropriate behavioural and sensory strategies are being used with your child.

This is a great resource that can be used as a handout to parents or even teachers, and includes a short checklist which may be beneficial when deciding whether a child may need to be seen by a psychologist or occupational therapist.

This is another useful link that goes further into sensory integration. Again, it includes a useful checklists for sensory difficulties to be aware of. There are a total of three checklists for different ages in children, as well as an adult checklist. What I like about this resource, is that it looks at the differences between sensory processing disorder and other diagnoses, such as ADHD, as well as some suggestions for sensory integration and sensory play.

Bullying: Is it Happening to Your Child?

So, What Actually Is Resilience?